I met Richard Ashrowan and Alexander Hamilton at the Foksal Gallery for the first time over a year ago, on the occasion of one of Richard Demarco’s visits to Poland – that Great Impresario from Edinburgh, Poland’s Scottish friend of Italian name, temperament and receptivity. From the very beginning I felt something intriguing, mysterious, and at the same time close and recognisable in their attitudes and work, promising that our collaboration would be fruitful. I felt as if we were a family, or compatriots. Celtic compatriots, as Joseph Beuys, Caroline Tisdall and Richard Demarco once used to greet one another in Scotland. All these personalities remain in the background of our current collaboration with Ashrowan and Hamilton; at least this is so in my thinking about it. And there is another person, Aneta Wiśniewska, who first directed my attention towards Ashrowan’s and Hamilton’s work. The motto of our exhibition – Beuys’ and Tisdall’s catchphrase “We go this way” – is painted on the wall above the entrance to the Foksal Gallery. Collaborating with Alexander Hamilton and Richard Ashrowan, we in the gallery are in favour of clear choices and an understanding of art and the world based on thinking, sensitivity, strenuous work, attentiveness, separateness, and at the same time on respect for other artists, made manifest in the attitudes of the participants. Our initial talks with Ashrowan and Hamilton sometimes followed a winding course. However, after my visit to Scotland in the spring of 2008, the idea of the exhibition Blue Flora Celtica – Kinloch Rannoch ~ Fingal’s Cave eventually took its shape as the summer show of both independent artists at the Foksal Gallery in Warsaw.

In a way, both artists are akin to one another and, let me repeat, to the Foksal Gallery and I. At the same time, they are independent originators, who are in dialogue, and may at times also be in artistic dispute, or creative conflict. They decided to prepare this exhibition together, speaking with one voice, but also as a clear duo of attitudes, of visions of the world and art, of approaches to collaboration, etc. The projections of the dramatic film by Ashrowan on three separate ‘screens’ – the recordings of his expeditions to the Island of Staffa (Inner Hebrides) and to Fingal’s Cave on its tip – are in dialogue with but also in contrast to the contemplative and beautiful cyanotypes by Hamilton. These cyanotypes are the recordings, or light/chemical imprints of flowers – the title ‘Blue Flora Celtica’ comes from the geographical, cultural and symbolical regions, which Ashrowan’s film also refers to. In the case of Hamilton’s sun pictures, their contemplative nature is complemented with dramatic light, much like Ashrowan’s projections. In fact, Hamilton’s works are a kind of herbarium. Here also we have some affiliations with Beuys, whose earliest and latest works were just collages made with the use of plants, and filled with symbolic meanings. Coming back to the presentation of Ashrowan and Hamilton, in fact, the whole exhibition is built with light, originally created using natural light, then presented with artificial light during the very exhibition. However, it is not the light that is at stake here primarily; the ingenious use of light is needed by the authors to transmit a multitude of contents and visual impressions in order to build the semantic and sensual space. The light and its intenseness, or its lack at other times, outlines the motricity of the viewer, the kinetic of perception, and our wandering through Ashrowan and Hamilton’s world, through the northern parts of the British Isles and Scotland, that is, through the Celtic world. All this is imaged in a fresh and topical way, full of meanings. This exhibition speaks of visibility, but is not exclusively about it. The regions where our authors live and work had once been deliberately visited by the Romantics; let’s recall here Mendelssohn’s Scottish Symphony or another piece of that composer, The Hebrides, known also as the overture Fingal’s Cave, and Turner’s sketches from Fingal’s Cave. Many other artists have also referred to these areas; for example, the musicians of the Pink Floyd group, who composed the piece entitled Fingal’s Cave for Zabriske Point (eventually not used in the film), or Beuys himself, with his action Celtic (Kinloch Rannoch) Scottish Symphony. With our sensitivity of perception, the works presented at our exhibition, with their references to Romanticism, which deepen their contents, and in particular with their direct recollections of Joseph Beuys’ activity in Scotland, seem very close to me, to the Foksal Gallery, to all of us in Poland. This is so because of our inevitable associations with that German artist’s activity in Scotland in the seventies. Almost at the same time Tadeusz Kantor was remarkably present with his Cricot 2 theatre in the same places, mainly in Edinburgh, and numerous Polish artists were presenting their works in Richard Demarco’s domain. This was a result of the strong collaboration which existed then between that Great Impresario and the Museum of Art in Łódź with Ryszard Stanisławski, and the Foksal Gallery with Wiesław Borowski. I myself did not take part in those projects at the time. However, my collaboration with Beuys and Kantor, and especially numerous exhibitions of these artists of key importance for the world of art in the second half of the twentieth century, make those projects very close and familiar to me. Moreover, our Scottish links included our collaboration with the unique originator, Ian Hamilton Finlay; we should remember also the exhibition organised by us in 1988 under the aegis of the Museum of Art from Łódź and the Third Eye Centre, and under the direction of Ryszard Stanisławski. Preparing it, I worked with Maria Morzuch and the former director of the Third Eye Centre and its then curator, respectively, Christopher Carrell and Andrew Nairne. That presence of Polish art in Scotland more than twenty twenty years ago was entitled Polish Realities. New Art from Poland. Now, as a direct result of this presentation at the Foksal Gallery, we are planning, maybe as a common undertaking with Ashrowan and Hamilton, to show Marek Chlanda’s work in Scotland in the years to come.

In 1981, when Beuys made a donation called Polentransport 1981 to the collection of the Museum of Art in Łódź, he made another action, detaching the massive door of the Poor House in Forrest Hill in Edinburgh, upon the location where he had made manifest his previous performances (posters announcing Beuys and Kantor actions from the seventies in Edinburgh had been placed on this door). Then, also in 1981, Beuys transferred it to the Abteiberg Museum in Moenchengladbach, Germany. Beuys’ work was entitled Poor House Door – A New Beginning is In the Offing. Doors, gates, openings, closings (in front or behind someone, behind the self), and also passing, invitation, hiding, leaving ajar, revealing a secret – all those senses of Beuys’ meaningful work from 1981 are carried now (in 2008) by Richard Ashrowan and Alexander Hamilton’s exhibition at the Foksal Gallery. This includes other favourable artistic influences that link Beuys’ intentions with those of the artists now presented at the Foksal Gallery (in my perception, at least). Lehmbruck’s postulate of carrying fire by the successors, previously taken and preached by Beuys as a mission, is now refreshed by Ashrowan and Hamilton’s work. The same process, which we can synonymously call resonance, or refreshing consonance, happens not only in the area of creating art. It can manifest, I believe, also in attitudes towards art and in ways of making the artistic work manifest, as well as in the work and conduct of the witnesses of the meanings of the artists’ work, at art galleries, for instance. I believe these are the attitudes within the circle of the Foksal Gallery. 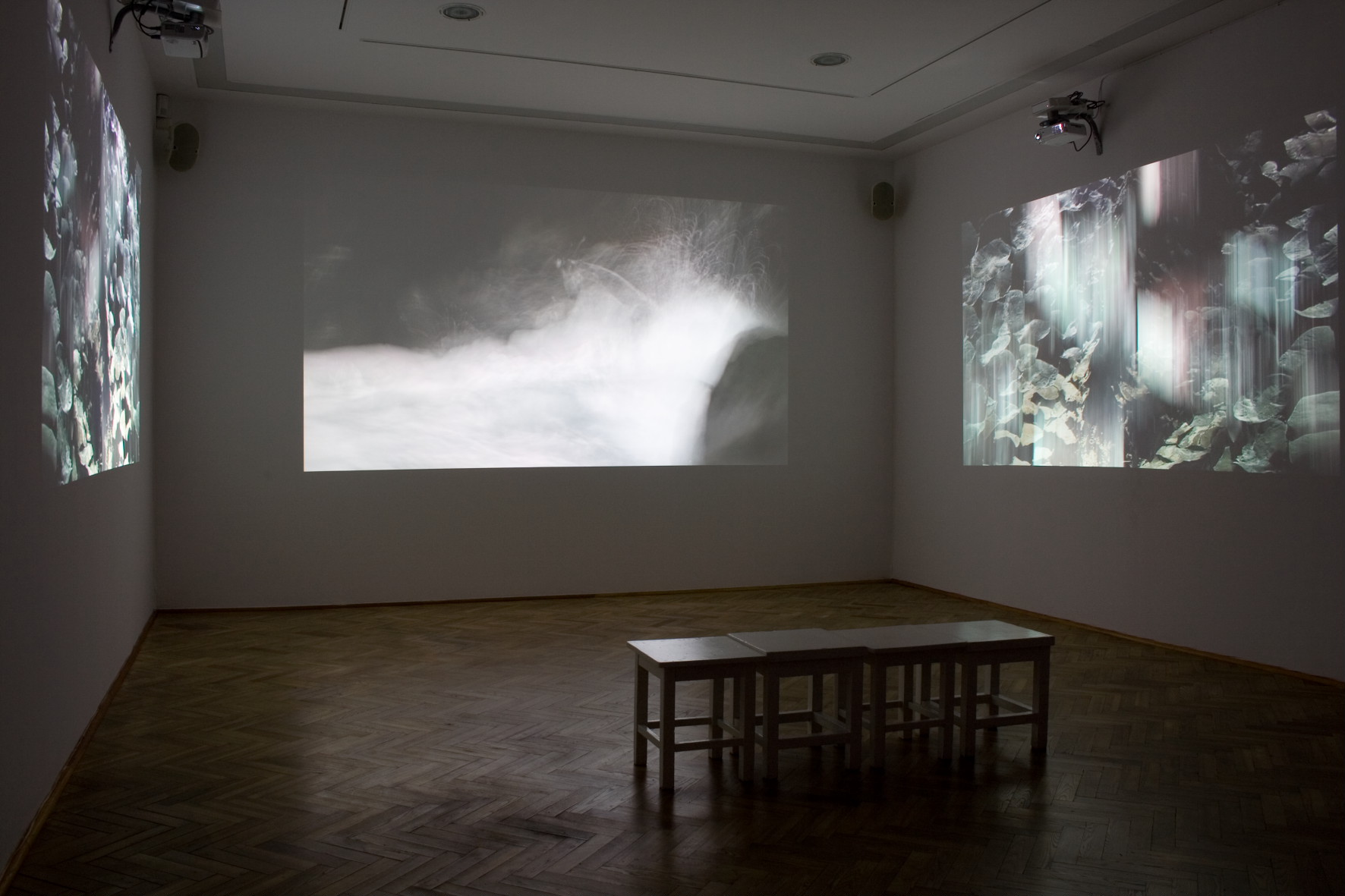 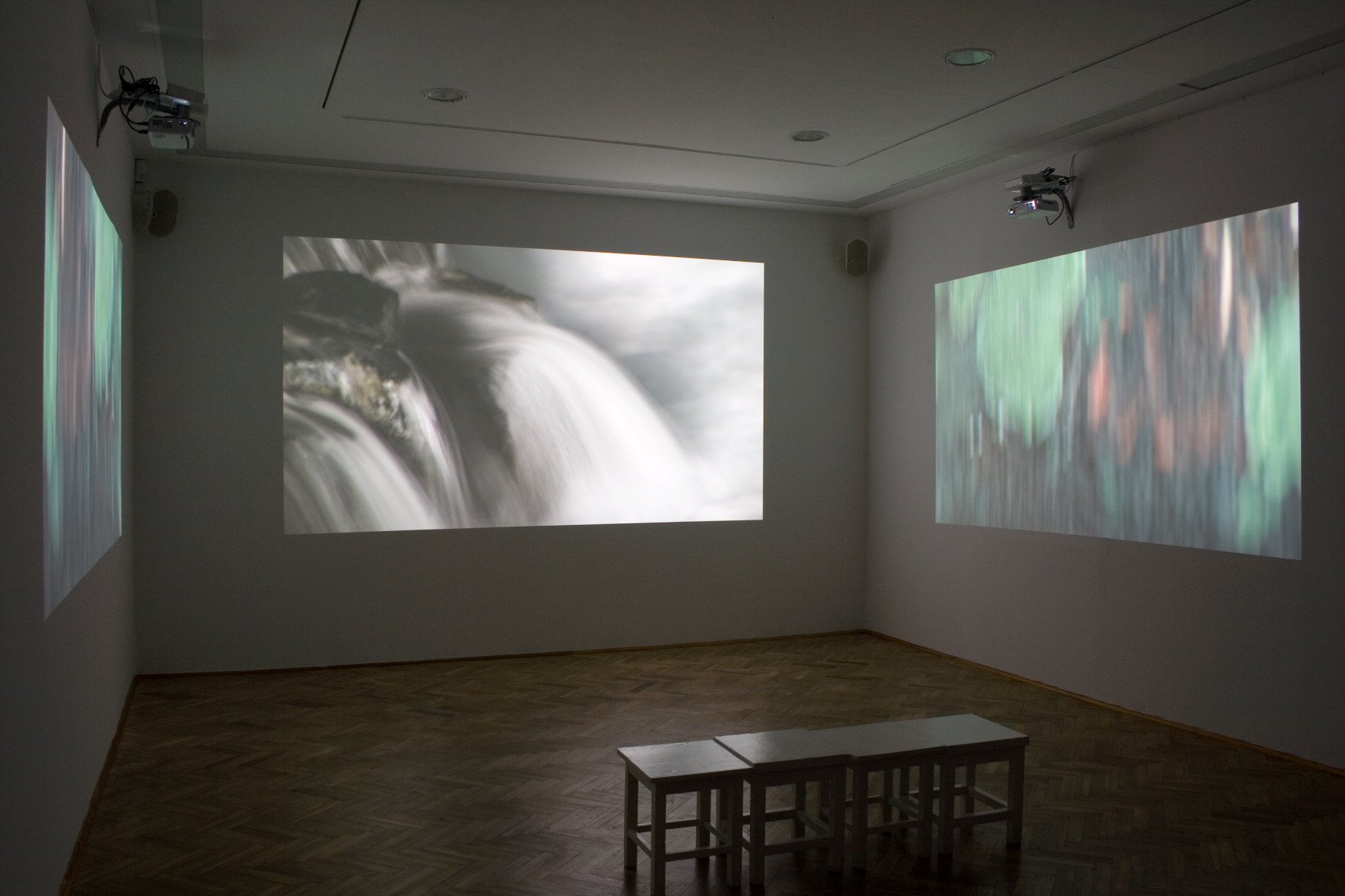 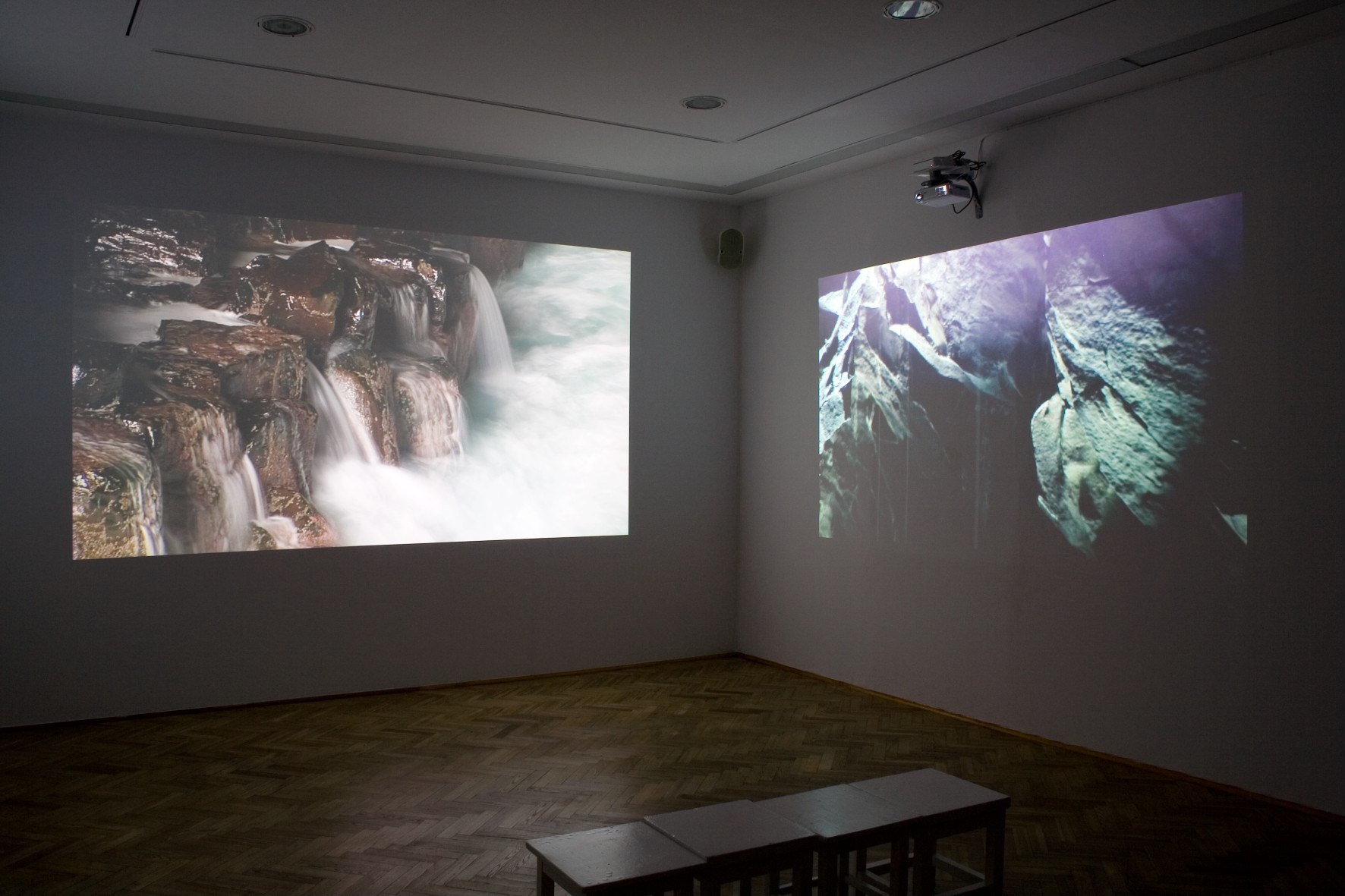 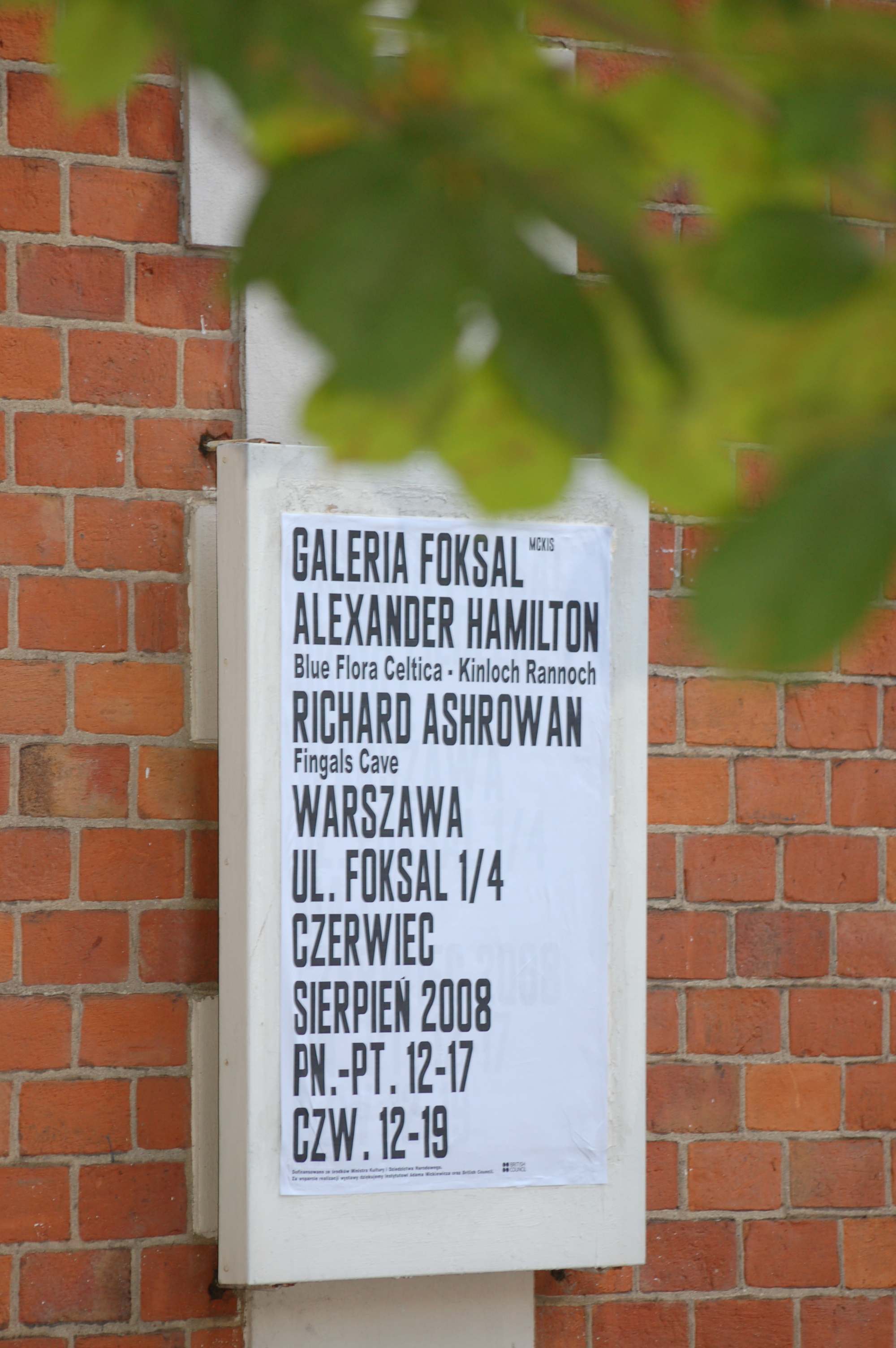