Millais and the Sound of Many Waters – Dr Ailsa Boyd

Home » Millais and the Sound of Many Waters – Dr Ailsa Boyd
‘Millais has a greater force in the rendering of nature than any painter in the world’.i
Dante Gabriel Rossetti

The Sound of Many Waters is a dramatic view of the Rumbling Bridge Falls near Dunkeld, Perthshire, and was painted in 1876 by Sir John Everett Millais (1829-1896).ii Now better known for his Pre-Raphaelite work, between 1870-1892 Millais painted 21 landscape scenes, which have been described as ‘the great dark horses of his career’.iii They are all on a large scale, about 6x4ft, and they demonstrate how Millais developed his early Pre-Raphaelite style into his own personal responseto the ‘new’ landscape painting. 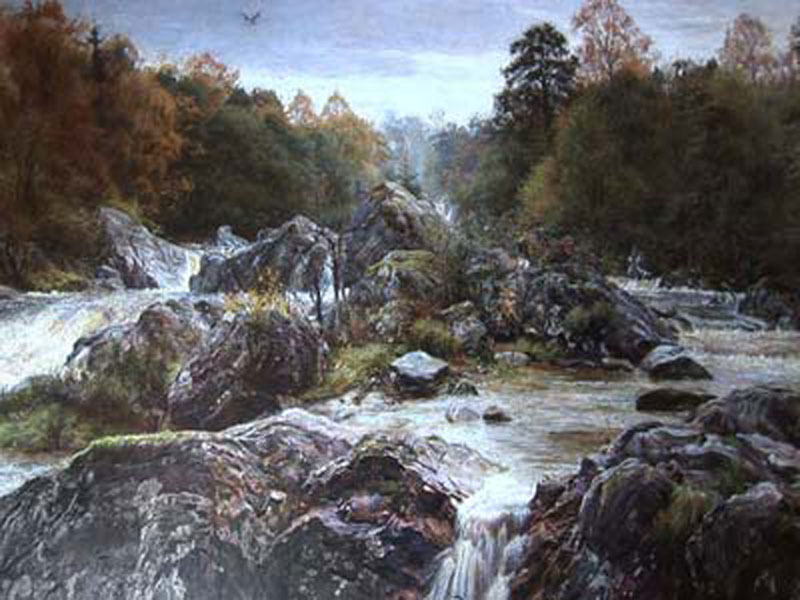 ‘The Sound of Many Waters’ by J.E.Millais, Fyvie Castle

Millais’ first trip to Scotland was in 1853, when he visited Brig o’Turk with the critic John Ruskin and his wife Effie, and painted Ruskin’s portrait against the backdrop of a waterfall in Glenfinlas.iv Ruskin was the champion of the Pre-Raphaelite Brotherhood and hoped that his patronage, instruction and friendship, would turn Millais into a suitable successor to his beloved Turner. However, completion of the portrait was hampered by bad weather, as Millais’ plein air technique involved painstakingly transferring every detail of the scene onto the canvas.v During this time, Millais and Effie fell in love, leading to the annulment of the Ruskin’s marriage in 1854.vi

Effie and Millais married in July 1855, and probably to avoid scandal and for financial reasons, they lived in Perth for the first six years of their marriage. During these years, Millais distanced himself from the close observation of Ruskin, creating paintings like Autumn Leaves where narrative is suppressed for a mood of transience and melancholy.vii His brushwork became looser, and in addition to historical subjects (often featuring children), Millais became a popular portraitist. By the 1870s, only Frederick Leighton could rival Millais as the most important artist in Britain, and his financial success was secure. They returned to live in London in 1861 but Perthshire was their regular holiday destination, where they rented houses for three or four months each summer. Millais was a keen sportsman, enjoying salmon fishing, deer stalking and shooting.

Although Millais visited Scotland primarily to take a break from the confines of the studio, by 1868 he was keen to depict the dramatic scenery he knew so well from scrambling over hills to stalk deer, or wading in rivers to fly-fish. In 1870 he completed Chill October, which set a new standard in landscape painting.viii With their depictions of dramatic weather and melancholy mood the paintings convey his love for the beauty of the Scottish countryside. He said that ‘there is more significance and feeling in one day of a Scotch autumn than in a whole half-year of spring and summer in Italy’.ix

Millais did not ‘compose’ his landscapes, his approach was still based on Pre-Raphaelite precepts of painting only what he saw, evidencing God’s handiwork. He wrote that in painting, never deviat[e] from the nature before you, except to obtain that impression or statement which is fleeting and which the artist has to render almost as quickly as it passes before him.x

However, he did not depict light and atmospheric effects in the broad manner of the contemporary French Impressionists. With the ‘keen insight of the true sportsman’, he painted the ‘details of foliage, grasses, and mosses that a botanist would instantly recognise’, in a sharp-edged manner, and atmospheric effects flicker on the canvas surface.xi As Helmreich has discussed, the central significance of these mimetic landscapes was their ‘ability to appear as an empirical record of natural effects while yet evoking subjective passions’.xii For W.M. Rossetti, The Sound of Many Waters demonstrates how ‘a large abundance of striking material is treated with masterly energy and ease: all comes so well together as to produce an effect almost of simplicity, though in fact the subject is extremely complex’.xiii The mood of these autumn scenes, devoid of people with perhaps a single bird in the sky, is melancholy, but the evolving cycle of nature is ever present, and they convey a statement on our relationship to the natural world in the age of Darwin and industrialisation, ‘a poem in painting’.xiv

Millais began painting The Sound of Many Waters in early November 1876. He stayed at Mr Tomson’s Rumbling Bridge Cottage, near Dunkeld, just 250 yards away from his painting spot just above the Rumbling Bridge. He had a wooden hut, constructed by a local carpenter, to shelter him and his large canvas from the elements. He wrote to Holman Hunt:

“I am now in a Highland cottage … I have commenced a landscape which is a beautiful scene of rushing water between rocks and autumn foliage forming a crescent above … It is a diabolical subject as it is so full of detail.” xv 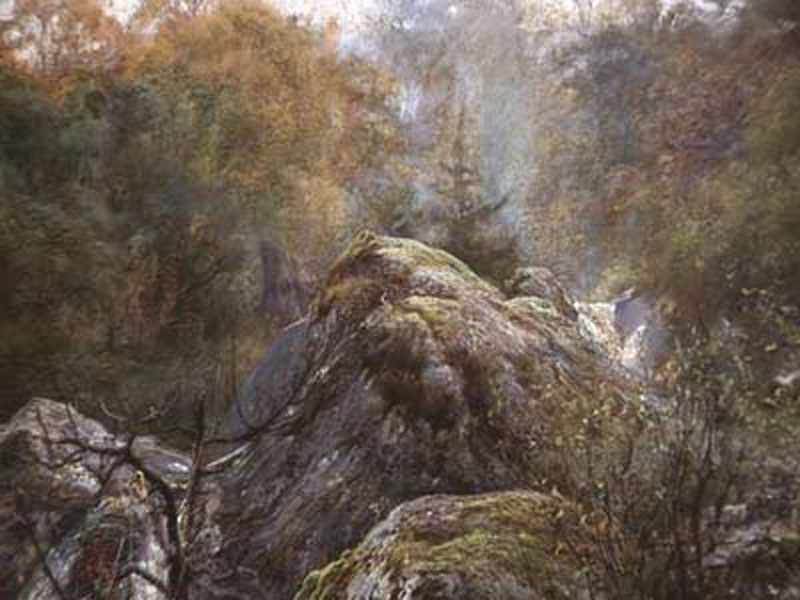 Detail from ‘The Sound of Many Waters’ by J.E.Millais, Fyvie Castle

His painting conditions were certainly ‘diabolical’, and Millais, now in his late 40s, must have been extremely hardy to be able to paint under such circumstances; his ‘energy was extraordinary’. xvi He wrote to his wife:

“This picture is full of vicissitudes. I recommenced work yesterday, and got on wonderfully, but required water; and it has come with a vengeance to-day; and again I am trembling for the safety of my hut, as it is submerged at this very moment – a perfect deluge, and likely to continue all night. I have, however, got on so extraordinarily well these last two days that I may finish this week … I stand until I am ready to drop, and drink enough whiskey and water to make an ordinary man quite giddy; but without feeling it.” xvii

He was also pestered by a local ‘madman’ who ‘preached, barefooted, to the rocks and trees all day’ until he was removed by the Superintendent of Police in Dundee.xviii Perhaps it was not just the continual noise of the rushing torrent but this man’s preaching which gave Millais the Biblical quotation for the title, referring to the appearance of the Son of Man in Revelation: ‘And his feet like unto fine brass as if they burned in a furnace; and his voice as the sound of many waters’.xix He had to contend with snow, storms and the river bursting its banks. His painting hut was smashed on the rocks, but the painting was carried to safety at the cottage. The weather suddenly became warm and mild and he was able to finish the painting and return home, probably near the end of November.

As an experienced fly-fisherman, Millais would stand for hours watching the water for the signs that would tell him where the salmon were lying.xx Using similar concentration, he was the ‘most conscientious and laborious of painters’.xxi When it was exhibited at the Royal Academy, the painting was enthusiastically received and W.M. Rossetti called it ‘the finest landscape yet exhibited by Mr Millais’, also noting:

Seldom has a landscape been painted more thoroughly natural in its sense of actualities, or to the spectator more realistic of the total impression – the ordinary paramount impression, not heightened by any exceptional intensities of effect – of a scene full of the force and the beauty of motion.xxii

By looking with as much careful concentration as Millais, and recording the actualities of the landscape, but through the eyes of a camera, Hamilton and Ashrowan have created their own ‘impression’ of Rumbling Bridge. This new type of recording nature has re-captured for the 21st century a view just as dramatic as the painting, which in its essence could not but speak to Millais and his love of the Scottish landscape.

Back to A Landscape Symphony in 22 Movements by Hamilton & Ashrowan

Images from A Landscape Symphony in 22 Movements by Hamilton & Ashrowan: 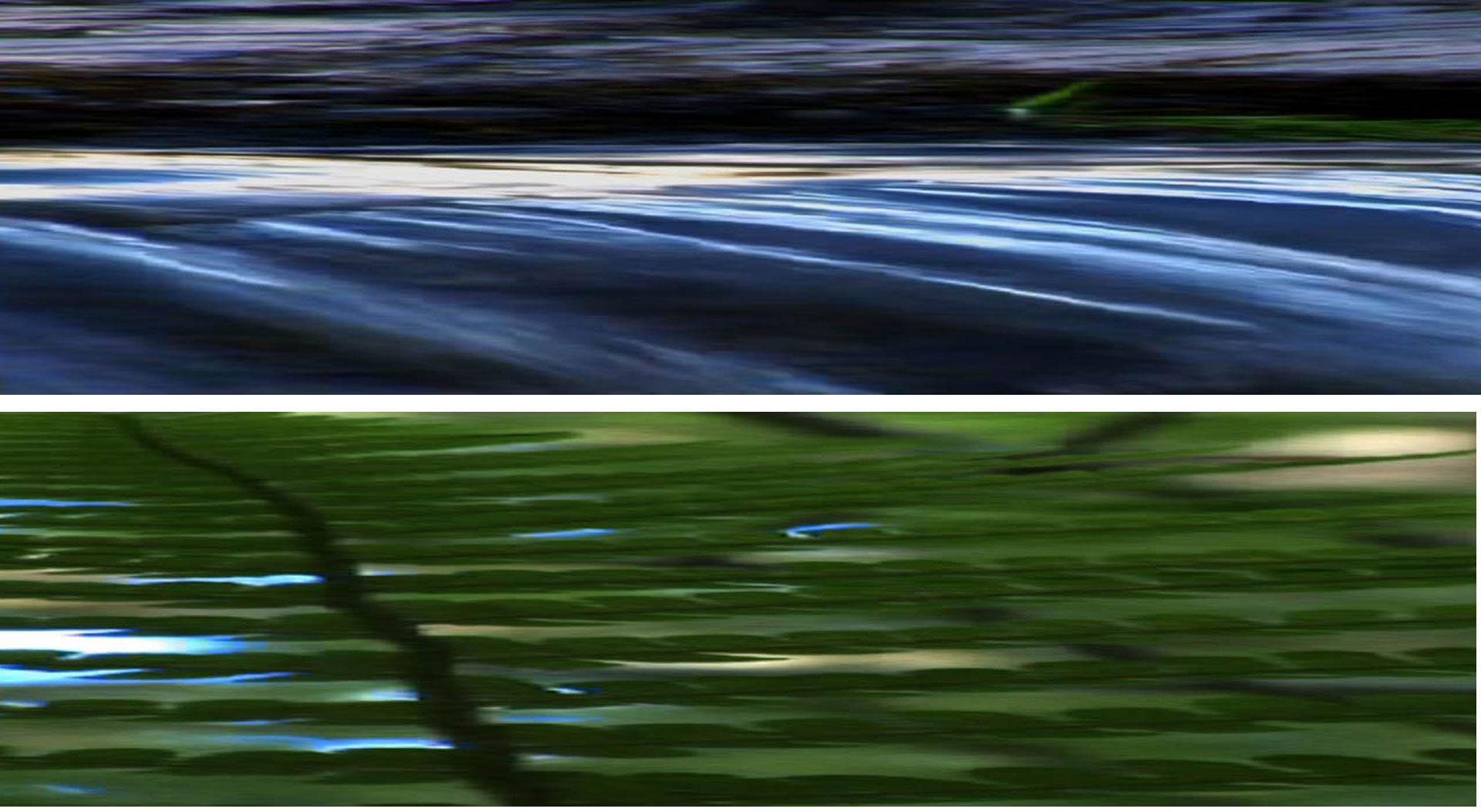 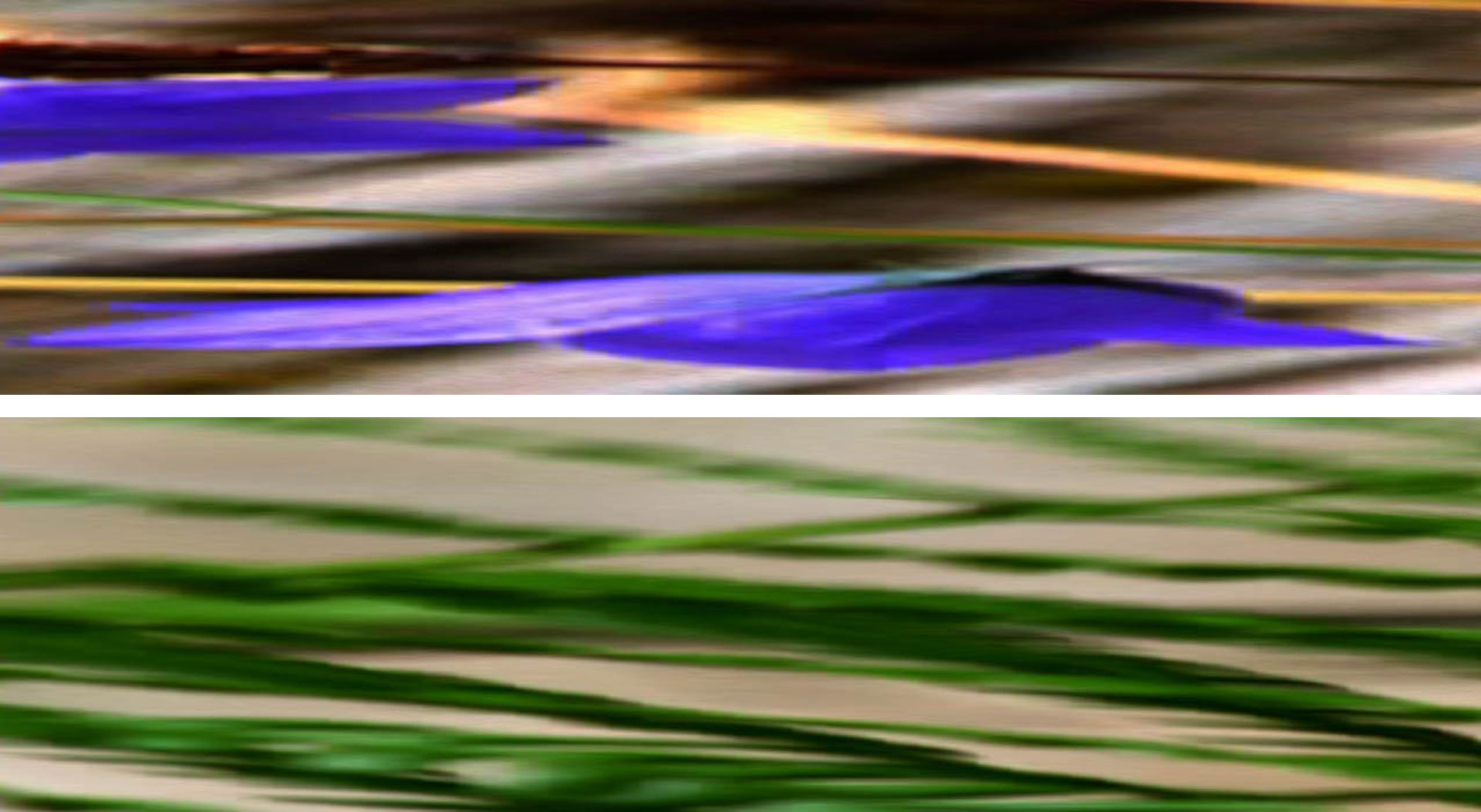 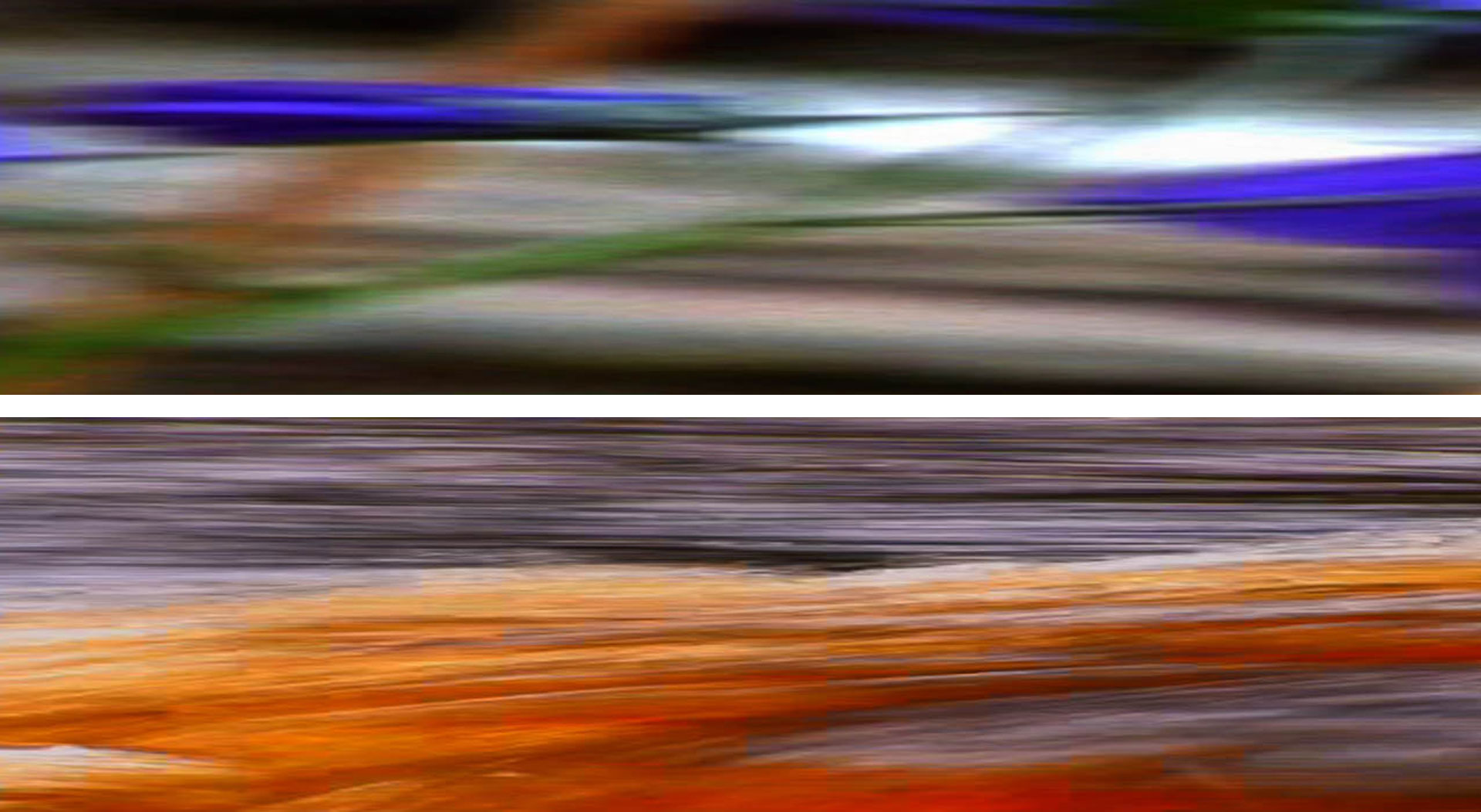 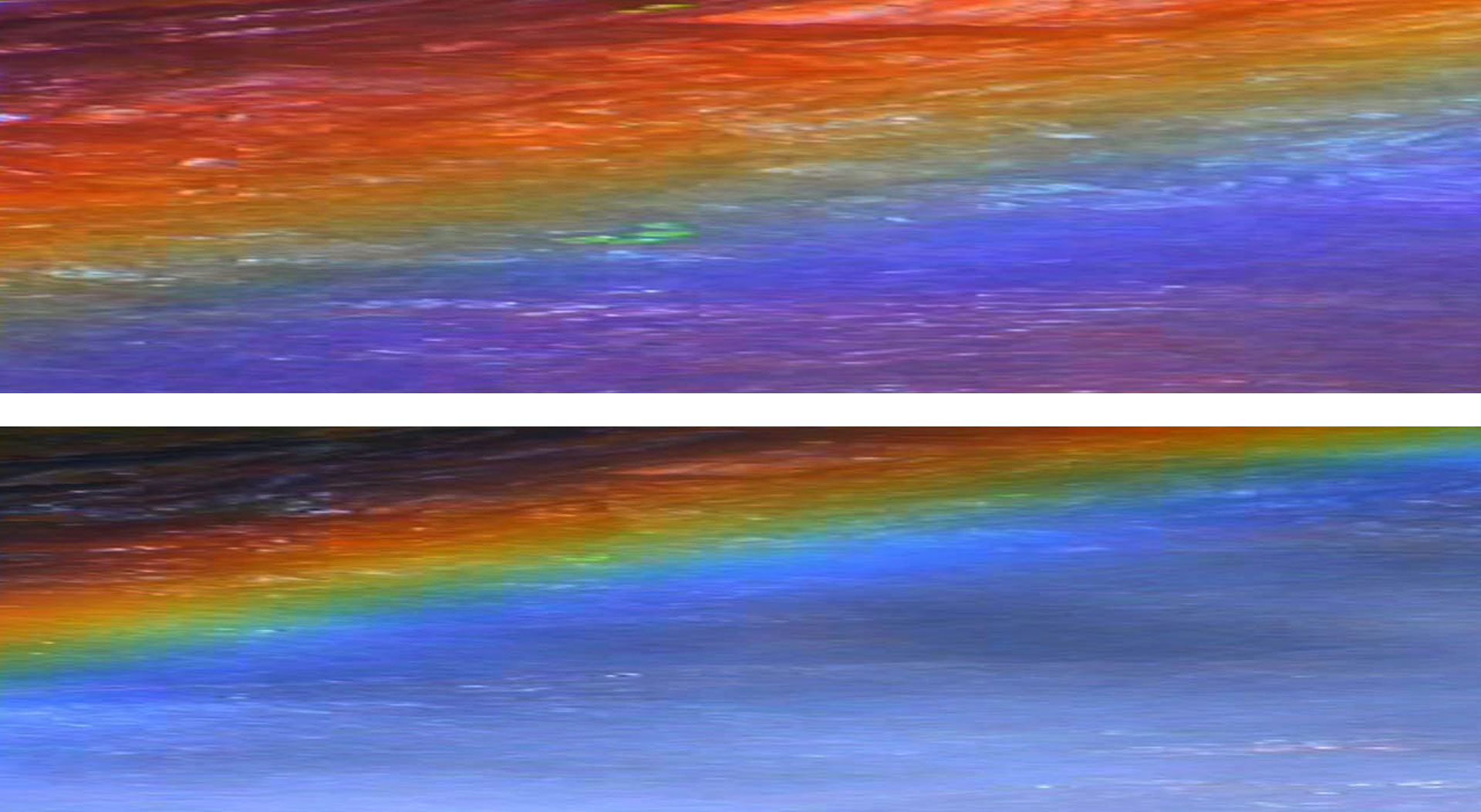